HomeNewsProviding a Load for Chiller Start Up – Engineered Air Balance

Providing a Load for Chiller Start Up – Engineered Air Balance 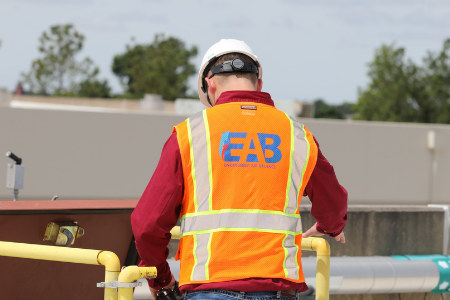 “Quality is never an accident; it is always the result of high intention, sincere effort, intelligent direction and skillful execution; it represents the wise choice of many alternatives.” – William A. Foster

How many times have we assisted with the startup of new chillers and did not have the means to provide enough load to bring the chiller to full capacity?  Below is a description of the method we used on a recent installation.

We recently performed the test and balance for a new central plant that was added to the campus of a local corporation.  The plant was designed to serve two existing buildings, to reduce load of the existing plant, and two new facilities that were under construction. Five 1300-ton York centrifugal chillers, five York forced draft cooling towers, primary chilled water pumps and secondary chilled water pumps were provided for cooling.  Four 3840 BTU/Hr gas fired condensing boilers, primary heating water pumps and secondary heating pumps were installed to provide heating.  The chilled water system is constant volume primary and variable volume secondary with a bypass or decoupled loop in the plant. 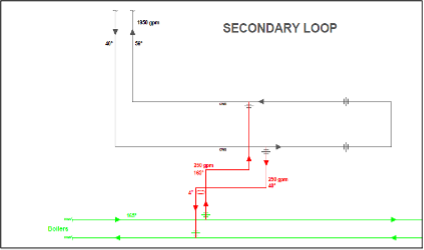 The chiller design flow was 1950 GPM.  One primary pump was balanced to 1950 GPM using the pump curve and verified by the evaporator design differential pressure.  One secondary pump was adjusted to the same 1950 GPM using the pump VFDs and an ultrasonic flow meter.  The pump flows were matched so there was no water bypassing in the decoupled loop and all the water was flowing through the chiller.  250 GPM of 165°F heating water was introduced to the chilled water system and return water system.  Both flows were verified using an ultrasonic flow meter. The design entering and leaving evaporator temperatures were 56°F and 40°F, respectively.  Using the direct relationship of the heating and chilled water temperatures and GPM we should be able to provide the design load for the chillers.

There were concerns about the initial warm water entering the chiller evaporator because we were doing this in the summer. The chiller start-up technician had no issues unless the first blast of water was over 100°F.  The water was approximately 90°F, so it was not an issue.

The test was started with the chilled water pumps providing 1950 GPM and the heating water closed. The chiller was energized at this time.  As the supply water from the chiller approached 40°F, 250 GPM of 165°F water was supplied to the chilled water system and 250 GPM of 40°F water was removed and sent to the existing heating water system.  With some minor adjustments and continuous monitoring of the chiller evaporator and condenser entering and leaving water temperatures we were able to provide a continuous load to the chiller for start-up and verify the chiller operation prior to bringing the plant online to serve the existing buildings.  The cooling tower fans were manually controlled to maintain 85°F or below entering condenser water temperature.

This procedure was repeated for the remaining four chillers.  After startup was completed a Method of Procedure was developed to switch the existing building from the old plant to the new plant.  This was performed during the evening when the buildings had few occupants.  The switch over went well with very few problems.